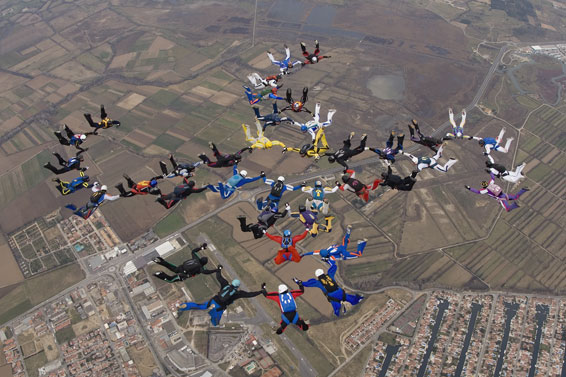 This popular winter boogie has been on for 21 years. The format for this boogie was the same as previous years. Top class organizing in FS and FF for all levels. In FS there was Milko, Regan and Billy from the UK,  Karsten from Switzerland, Thomas Spielvogel from Germany and Fran and Felix from Spain.

In FF organizing was by Babylon and Tim Porter

The famous Tombola and the 10-way Speed Star competition.

So, how was the boogie this year? Jules, Sarah and Jarno say:

Made 44 jumps at the boogie (in 8 days) and had an awesome time.
Learned to go head down with the babylon peeps and Darren's help, did some cool wing suit flights and flew with a bunch of cool people. There isn’t one jump or one evening where I would have wanted to be anywhere else...Watching Tim Porter carve around every type of jump possible. tracking, atmo, bigway RW jumps...it was damn cool...and during the week it got warmer and warmer. I had a blast!


Each day was clear blue skies, but that first lift was chilly to say the least! Milko Had a 20 way group from day one. Regan averaged between 10 and 16 ways. Bill, Spieli and  Karsten had  from 4 ways to 12 ways.

At the end of the boogie the intermediate FS jumpers were doing 20 ways and they joined up with Milko´s Group for a memorable 40 way. Great way to finish things off.

We had some awesome footage from Tim Porter as he zoomed past the big ways, the speed he passes makes it look like everyone else is standing still.

Everyone on organized loads was managing between 5 and 8 jumps per day, with the  flight line of 5 aircraft doing up to 40 loads per day in total!

There was certainly plenty of opportunity to jump, depending how the party the previous night went!

The 30th December saw the beginning of the 1st ever Skydive Empuriabrava 10 way Speed Star Competition. 8 teams entered with some respected talent making up the top three teams. Held over three rounds, In third place was Les Vernerables, second was In the Hedge and in first place was MIX 10. The video was breath taking, fantastic builds of those 10 way stars.

Night time came and it was time for the famous Tombola with prizes totaling over 10,000 euros, ticket sales had been hot!

1st prize was a complete system, Javelin Odyssey. Sabre 2, PD reserve, and Cypres 2, which just happened to be number 100.000 since making them began. What an amazing 1st prize. The 2nd prize: a custom made Atom from Parachutes de France, with all the options included. 3rd prize was a 25 block jump ticket. Also, there was everything else you need to jump:

Suits from Sonic and Parasport Italia.

Audibles from Larsen and Bruusgard

T-Shirts from Mirage, PD and Airtec

Going as fast as I could it still took nearly 2 hrs to get all the prizes away! Really fun night.

After jumping each day pinchos were served, beers bought and everyone was in the large marquis for the DVD of the day expertly put together by Gael Tanguy, followed by a bit of djing from Regan (that’s me!) then off into town for some, bed for others!!

Every night was a whole load of fun for one reason or another, for instance Vicky and Thea´s famous 5am dip in the pool, after they had broke through the ice.

The mystery of Sarah´s bunkroom door coming off will proberly never be solved.

But the BIG night, New years eve…well, that was just amazing. It all started on the DZ with more djing from me and Gaels video of the day. Then it all began in earnest at 10.30pm in the Orange Kiwi. Me and Gael spinning the tunes with what seemed like  everyone from the boogie spilling out onto the streets. I managed to escape at 4am, the place was still going mad. Some people made it up to the nightclub in the hills till 9am!

As I write this the main tent is being dismantled, but we still have plenty of jumpers still here, just don’t seem to want to go home!

For me it was the best boogie I have seen here in recent years, a whole load of jumps and fun had by everyone. I just want a week by a pool holding cocktails to get over it. Hope to see you at Easter!

For more info on up and coming world class events check out the website www.skydiveempuriabrava.com