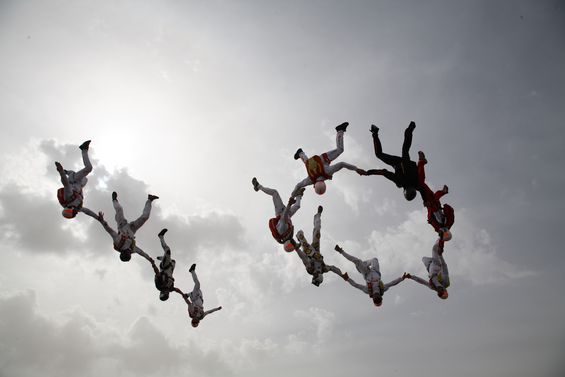 From the 8-13 September, Babylon celebrated their tenth anniversary. Since their founding in Empuriabrava 1998, they have continued to excel in freefly.

The festivities consisted of a week of flying. With some special jumps in mind; Europe’s best freeflyers were invited to join in the fun. Babylon had the pleasure to enjoy these jumps with Olav Zipser, Ippo, Nicolas Arnaund, Arno Fletcher, Stuart Meacock, and Stefan Klaus to name of few. A large contingent of French, Italian, Swiss, Spanish, Catalan, English, German, and a few Aussies, turned up for the fiesta… There were tubes (Babylon’s gift to free flying), big-ways, tracing and tracking jumps, not too mention the ‘Bomb’ was jumped for the first time in 10 years.

Babylon’s idea was to jump amongst themselves for the first 3 days, Babylon team and the invited flyers, to do high-level group flights. Then the last 3 days were to enjoy with everybody who came to party, let’s boogie!

The days begun, with a typical freefly start, around 10 am, coffee, briefing and ‘let the games begin.’ During the day there was a relaxed pace of jumping and an hour lunch break was enjoyed by all. Most days ended on a high note with beach jumps, lake jumps or a good group flight.

On the Wednesday, there was a beautiful sunset load to the “Pantano de Boadella,Darnius” . Everybody relaxed while watching the sun set behind the hills. The lakeside restaurant prepared a three-course meal that went down nicely.

The next day it was ‘game on’ and the drop zone enjoyed free load organizing by the entire school, over 10 free fly load organizers! It was truly a remarkable sight to have the best European freeflyers together at the same time, same place; there were not enough loads in the day. The last two days of the event, were blown-out by the tramontana (the infamous north wind); even our old friend the tramontana came to celebrate with Babylon.

On the last day of the event, Saturday, a big birthday bash. In a private location just outside of Empuriabrava, the guests enjoyed ‘dÈcor a la Babylon,’ a full argentinan BBQ, top international DJ’s. With a turn out of 150 people, the celebrations went on to the early hours of Sunday morning. It was a special week for Babylon and European freefly. Loads of jumps, laughs, smiles and good memories. Over the past decade there have been some remarkable achievements from Babylon, let’s see what the next ten years will bring, welcome to the next generation of Babylon Freefly…

A documentary is being made about the past ten years of Babylon freefly. Interviews, cool flying and a lot more. Due to be released this winter.