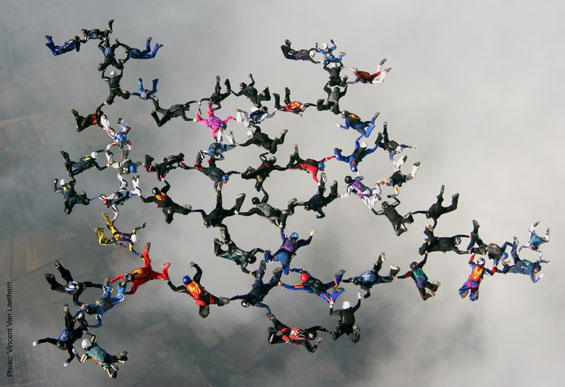 The sixty participants in this first edition of the Empuriabrava Airspeed challenge all agreed on the same thing: this had been one of the best FS events so far this year in which they had participated.

Following the successful model of the Arizona Airspeed Challenge, Skydive Empuriabrava decided to organise a similar event in Spain. Ivan Coufal, member of the Spanish National 4 – way team and co-owner of Skydive Empuriabrava, together with Spieli, Milko and Davide Moy, were responsible for the selection of the participants.
The professionalism and enthusiasm of Arizona Airspeed members Craig Girard and Kirk Verner took care of the rest. On the first two days the group done 16 and 20 way training jumps that served to examine the individual abilities of the participants as well as to find out what position suited each jumper for the final challenge. The highlight of theses first two days were the sunset beach jumps and free beer at the Surf Inn. A tourist train that circulated on the streets brought the skydivers back to the DZ just in time to pack and to start partying.

The third day was dedicated to 30 ways. The 60 participants were split into two groups, one group would be responsible for the base and the other group would complete the funky design that Craig and Kirk thought up. Already everybody started having ideas of what the final challenge might be.

Not only did the days prove to be interesting, but so were the nights. The parties stayed true to the pure Empuriabrava style of partying. Entertainment included live music with Bruno Brokken on the keyboards and Anna singing. This was topped of with the South African “poets” who had the entire party it stitches of laughter after making a series of poems about the day’s events. All this made it a “challenge” to be ready for the next day’s briefing at 8 am.

Finally the last day dawned and the challenge was presented by Craig and Kirk. A 60 – way composed of a bilpole and donut base and a sort of “hope diamond” construction with 2 out facing cranks and 2 in facing cranks on the outside. With beautiful blue skies above the first attempt on the challenge left it with only two people out and that was after the 30 – way base done a 270o turn, just to make it more “challenging”. On the second jump of the day the group cracked it and held the formation for 7 seconds.

The group could now relax, but Craig and Kirk said “Lets make it harder”. So now the in facing cranks also became outfacing cranks. The third jump was nothing to write home about, but the fourth jump left only one out about 30 cm from grips. There was only time for one more jump and the Airspeed boys as well as the participants who had been on other Arizona Airspeed challenges had been down that road before. One shot, just one more time and to nobody’s surprise the challenge was met once again and held for 4 seconds.

Craig qualified this first experience of holding a challenge in Empuriabrava as a home run. Kirk said that they will have to invent a more difficult formation for next year and that the organization and selectors should prepare themselves for a superior event in 2007.