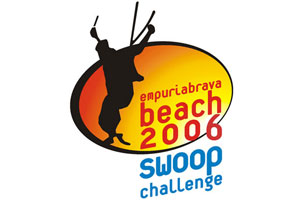 PARACHUTING CHAMPIONSHIPS OF EXTREME LANDINGS
From the 26th to the 30th of July on the beach in Empuriabrava (Girona), the 4th Swoop Challenge of canopy piloting took place, the most spectacular and exciting competition of parachuting that this sport offers. This discipline, also known as “Extreme Landings”, is the most modern of disciplines of sport parachuting. This is the 4th year that the parachute center SKYDIVE EMPURIABRAVA has organised with great success this competition and it wasn’t until this year that the FAI (International Aeronautic Federation) has recognised and authorised the 1st World Championship of Canopy Piloting that will take place in Vienna in August of this year.
Taking part in this 4th year of the Swoop Challenge were some of the worlds best
specialists of this discipline, attracting a large national and international
public, that during these dates visit the coast of Girona. Thanks to the help of
the town council of Castelló d´Empuries, Salomon, Red Bull, Passarel·la and the
Tourism Board of Costa Brava they were able to organise an attractive and very
successful competition, not only for the parachutists, but also for the viewing
public in general, that were able to watch the incredible manouvers made by the
competitors, only a few meters away from them.

More than 30 competitors
from different countries, including Australia, Argentina, Canada and the USA
amongst others, competed for prize money of over 20,000 euros and used the
competition as training for the World Championships that will take place in
Austria in a few weeks time and to measure there skills against those of other
competitors, given that most of the competitors are representatives for their
own respective countries.

Jumps were made from an altitude of 1500
meters high, the parachutists performed tests of precision, speed and distance
over the natural circuit at the mouth of the River La Muga where it meets the
Gulf of Roses.

In the last round, the North American Jonathan Tagle was
pronounced all round champion, in second place from Canada Jay Moledsky and in
third place from Spain Pablo Hernández.