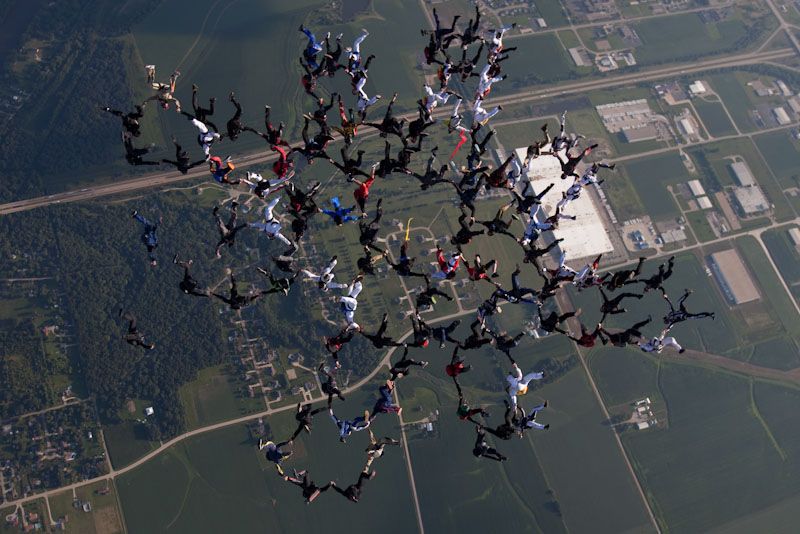 Last week seven members of the Babylon Freefly Group joined a massive freefly crew at Skydive Chicago to participate in the attempts for a 108 person freefly world record. The old record, of 69 was set in 2007 also at Skydive Chicago.

To make the task harder, the skyvan broke just prior to the event meaning everyone (108 + 5 cameramen), including the 8-way base, had to exit from the side doors of the 5 twin otters.

All the skydives were smooth and safe, Thursday we started with some almost complete 80 ways and on Friday we built the 108 way in only 6 attempts; exiting at around 17,000 feet using oxygen. On the first jump 101 flyers connected, the second attempt, we built a 106 way. On the third and fourth jump some flyers got lost in the massive air traffic and didn't find their slot; this gave new people the chance to enter the formation.

Jump five, 107 flyers gripped. ALMOST DONE! Finally on jump six all 108 freeflyers got together just one lost body pilot carved around the 107 and finally got to his pod which then built within a split of a second just before the first ones on the other side of the formation started to track away. It was spectacular!

There was still a lot of extremely good freeflyers waiting to get slotted, therefore we think this record will not stand for a very long time - there is still room to grow!

Congratulations all and many thanks to skydive chicago for a well organised event.

Have a look at the pictures of the event